The Hardy Boys franchise is generally split up into four separate continuities.

The idea of separate continuities was first used in 1987, after Iola Morton was killed in a car bombing in Casefiles #1 Dead on Target but lived on in the Digest series (part of the Original Continuity).

The third continuity was introduced in the April of 2005. In this the Undercover Brothers Continuity the Hardy boys work for American Teens Against Crime. The Adventures Continuity, the fourth and current continuity debuted in February 2013 where the Hardy's solve their own cases.

The Original Continuity and Casefiles Continuity are usually thought of as being in the same "world" with the death of Iola directly following the events of the Original Continuity. Other than the odd contradiction, such as the van that the Hardys bought after Iola's death in the Casefiles, but own while Iola is still alive in the Digest series, these two continuities work fairly well together.

Most of the time two of the three continuities fit together well (with the above mentioned fitting the best), but trying to fit all three together just causes inconsistency. 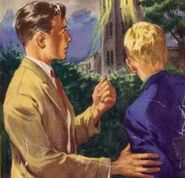 Original
Following in their father's footsteps, Frank and Joe Hardy solve their first case and start their careers as detectives. 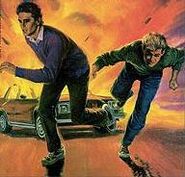 Casefiles
After Joe's girlfriend, Iola Morton, is killed in a terrorist car bombing, the Hardy boys start their fight against terrorism and work with highest level of American intelligence, the Network, for the first time. 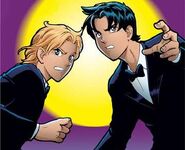 Undercover Brothers
In their never ending quest for justice, Frank and Joe work for top secret government organization American Teens Against Crime (ATAC), as undercover agents.
Add a photo to this gallery

The Clues Brothers takes place when Frank is nine and Joe is eight, so therefore happens years before any of the other series. The Clues Brothers series is usually thought of as a prequel series to the Original and Casefiles continuities. The Secret Files & Clue Books are in the same continuity and are usually thought to be a prequel series to the Undercover Brothers.

Clues Brothers
Frank and Joe move to Bayport, make friends with Chet Morton and start solving mysteries around their neighborhood and at Bayport Elementary

Be a Detective
Frank and Joe team up with friend and fellow detective Nancy Drew, for cases filled with danger, suspense, and surprise endings.
Add a photo to this gallery

There have been four different Hardy Boys TV shows (as well as a failed pilot, based on The Mystery of the Chinese Junk (1967 TV)) over the years, each in separate continuities.

1955 TV
Frank and Joe solve their first case, with the help of friend Iola Morton, and a year later solve their second. 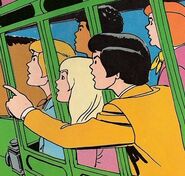 1969 TV
Frank, Joe, and friends Pete Jones, Wanda Kay Breckenridge, and Chubby Morton, use their bubblegum rock band as a cover up for their crime fighting operation.

1977 TV
The Hardy boys crack tough cases close to home, and around the globe, and start working for a government crime fighting agency.

1995 TV
Joe is in college and Frank works for the newspaper but the boys still find time for mysteries.
Add a photo to this gallery

Since 1979 when the courts ruled that Grosset & Dunlap were allowed to continue reprinting the Hardy Boys books that they have been publishing since 1927, many fans have wondered which stories are and are not "Canon" adventures of the Hardy's.

The majority of fans over the age of 45 consider only the books by Grosset & Dunlap (including the Detective Handbook and Volumes 59-66 that were printed by Grosset & Dunlap in 2005) to be the "Canon" adventures of the Hardy Boys, with all other books and spin-offs being "Apocryphal".

However, for the majority of fans 44 years and younger consider the subject to be rather pointless, since they consider all the books (including the Papercutz graphic novels, since the other comic books that have been published have been adaptations of TV episodes or derived from other non-Canon sources, whereas the Papercutz books are the continuing adventures of the Undercover Brothers continuity) to be "Canon" while the various spin-offs (TV shows, video games, etc.) are considered "Apocryphal". The fans in this group take the same view of the books as the fans of Star Trek take towards the episodes and movies: anything on film (in the Hardy Boys case, printed book form) is canon with there being different continuities [1][2][3], but the novels (HB: TV Shows), video games, etc. are "Apocryphal" stories.

Retrieved from "https://hardyboys.fandom.com/wiki/Continuities?oldid=16036"
Community content is available under CC-BY-SA unless otherwise noted.