As many of you already know the new Hardy Boys Wiki logo, is based on the logo, which graced the spins and back covers of Hardy Boys books for over 40 years, from 1946 until 1987. This emblem is arguably the most famous Hardy Boys logo of all time, and so, along with the new color scheme is what people expect when they think, "Hardy Boys Wiki".

Also notice the black and white sidebar boxes below the wiki logo, which now look quite similar to the box underneath the logo on the book spins.

We hope you are as excited about this new look as we are! 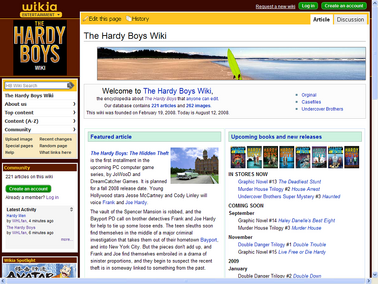 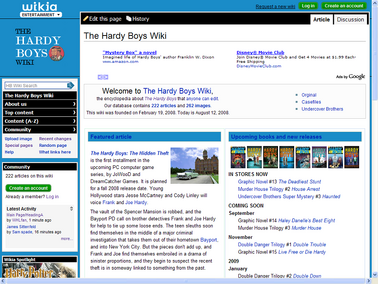 Old look vs. new look. Which do you like better?

Tell us what you think by posting a comment below...and please be honest! We want to know how you really feel!

Thanks! Yeah I think it's pretty good too (if I do say so myself :p)!

I made some polls for the new look.

I like it! Could links on header boxes on the front page be a different colour though? At the moment the words "Featured article" and "Upcoming books and new releases" are blue-on-blue making them a little difficult to read. Other than that, I like the logo and the colour choice! It really evokes the look of the old books - I've only just got used to this old style of cover because I only ever had the Armada paperbacks as a kid, but I've recieved a few of the PC revised text editions through bookmooch.com recently. Nicely done!

Thanks Paul! Yeah the headers on the mean page are a bit of a problem right now, since I'm not really sure how to have white text and still have links, but it's not to bad for the time being, and I think I've figured out a way to have white text.

Anyway I've got almost 100% positive feedback so far, so I must have done something right!

Thanks Tom. That's right it wasn't until 1987, but I was sort of thinking when they were still being published new, even so I forgot to mention the 70's! I think I'll revise the post.

Retrieved from "https://hardyboys.fandom.com/wiki/Forum:Our_new_look?oldid=5902"
Community content is available under CC-BY-SA unless otherwise noted.