For the original version of this book, see The Tower Treasure (original text)

The cover art used for all (US) printings of the revised edition, this format with the flash light at the top was first used in 1987.

The Tower Treasure is the first book in The Hardy Boys original series. It was first published in 1927 by Grosset & Dunlap, and updated and revised in 1959.

Tower Mansion has been robbed of forty thousand dollars in securities and jewels and Hurd Applegate, the crotchety old owner of the mansion, feels confident that Henry Robinson, his caretaker, is responsible. Henry, however, is the father of one of Frank and Joe Hardy's closest school chums and they are convinced of his innocence. Their father Fenton has taken on the case and they follow him all the way to New York to uncover the real crook, John (Red) Jackley. Finding him, however, is only half the problem as he dies in custody and the Hardys must still find the stolen valuables to clear Robinson's name and solve their first case, and follow in their dad's footsteps. Jackley had said the loot was in "The Old Tower", before passing out and later dying. The Hardy Boys looked thru the old Applegate tower but failed to find it; they even looked in the new tower, and around both, but to no avail. They could not believe Jackley would lie on his deathbed, so they kept looking, and later found an old and a new Water Tower, and after looking in the old one, they found the stolen loot.

Joe toppled over the railing into space! (p. iii) 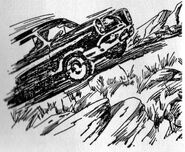 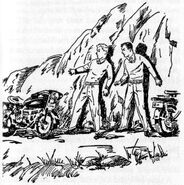 Add a photo to this gallery

Retrieved from "https://hardyboys.fandom.com/wiki/The_Tower_Treasure_(revised_text)?oldid=16198"
Community content is available under CC-BY-SA unless otherwise noted.